Andrew overcomes challenges to build a career in recycling 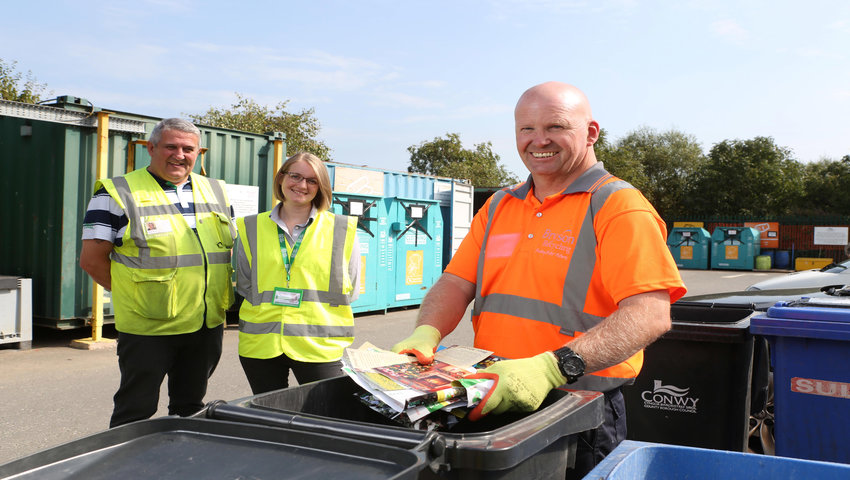 Award finalist Andrew Bennett is determined not to let dyslexia or losing his sight in one eye stand in the way of a successful career.

The 51-year-old Recycling Advisor from Abergele has achieved a Foundation Apprenticeship in Sustainable Recycling Activities, is working towards an apprenticeship and is now mentoring his workmates.

Andrew’s training has helped to secure him a promotion to Acting Supervisor with Mochdre and Abergele based Bryson Recycling, which has invested in his job-related training.

He has also been shortlisted for the Foundation Apprentice of the Year Award at next month’s Apprenticeship Awards Cymru, the annual celebration of outstanding achievement in training and apprenticeships.

Thirty-four finalists in a dozen categories are in the running for the prestigious awards, which will be presented at a high-profile ceremony at the new International Convention Centre Wales in Newport on October 24.

The awards showcase the successes of the best learners, employers, tutors and assessors in Wales who have excelled in contributing to the development of the Welsh Government’s Traineeship and Apprenticeship programmes.

“When the opportunity came to sign up to the Foundation Apprenticeship, I was nervous because of my dyslexia and my sight loss but I was keen to give it a go,” said Andrew, who has been supported by his employer and Amy Edwards, Training Officer with learning provider Cambrian Training.

“I have developed an appetite for learning that I never thought I would and have moved on to an apprenticeship to give me the opportunity to succeed in my career. My apprenticeship has made me believe in myself and my ability to make things happen.”

In March, he was thrilled to be named Foundation Apprentice of the Year in the annual Cambrian Training Awards.

Having undertaken community payback for a dangerous driving conviction in 2016, he was keen to atone for his mistake. “I was determined to be a good role model and show people that you can turn things round after making a mistake and I have worked hard to do so,” he explained.

Daniel McCabe, Andrew’s Supervisor at Bryson Recycling, said: “Andrew has excelled within his training and career as a Recycling Advisor and stand-in Supervisor for our Abergele site.”

Minister for the Economy and Transport, Ken Skates, congratulated Andrew and all the other shortlisted finalists.

“Our Welsh Government’s Apprenticeship and Traineeship programmes are helping increasing numbers of people to gain the skills and experience that we know businesses across all sectors of the economy in Wales really need,” he said.

“The Apprenticeship Awards Cymru provides an excellent opportunity to celebrate and showcase the achievements of everyone involved in those programmes from our star apprentices and employers, to learning providers and trainees.”