For the second year running, the Lettterkenny Rotary Club in association with Donegal County Council and Bryson Recycling are appealing to members of the public to donate unwanted, repairable bikes to the ‘Bikes 4 Africa’ appeal to any of the six Recycling Centres located throughout the County at Letterkenny, Milford, Stranorlar,Carndonagh, Laghey and Dungloe, during the month of October.

Bikes that are donated to the ‘Bikes 4 Africa’ appeal are collected from the Recycling Centres and sent to Loughlan House, correctional facility in Co. Cavan where the inmates are offered rehabilitation and training as well as supporting charities by their involvement.  In this instance, they refurbish the bicycles by doing minor repairs. This is a fabulous arrangement facilitated by the Irish Prison Service where the prisoners repair the bikes and they are supporting a charity as well.

Speaking on the initiative, Paddy Delap, Chairperson of the Rotary Club said, “The response to the appeal last year was overwhelming with the Letterkenny Rotary Club sending over 50 bicycles to Gambia, and we want to do the same again this year!   It costs €10 per bike to have them transported so any donations received by the Rotary Club will be really appreciated”.

Many African children live in remote communities, a long way from their nearest school.  Without reliable, affordable motorised transport, the only way they can get to school is to walk, often up to 10Kms each way in searing heat.  That’s not an easy task and having a bike would make a world of difference to a child, their family and even the local communities.  By having a bike, a child could arrive at school on time, instead of late; he could begin the day alert instead of tired after a long walk; and travel quickly and safely home from school in daylight, and is has been proven, that this results in many pupils achieving higher academic grades.

Bikes remain the property of the school, with teachers allocating them to the children according to set criteria.  When a child graduates from school, their bike is then reallocated to another child.  The strategy is to only allocate 100 bikes to each school and it is the most needy of these children, the best behaved, the most hard working that are allocated a bicycle by their teachers.   The effect of this strategy is to raise the academic standards of the entire school, and therefore, each bike impacts positively on as many as 10 students.

The latest shipment in May of this year brought the number to refurbished bicycles to 1,000, all of which will eventually be transported to The Gambia, where Rotary’s partner organisation “Jole Rider Gambia” pre-selects the schools, and then oversees the distribution of the bikes, with the assistance of the Gambian Education Ministry.  “You can rest assured that your unwanted bicycle will be used in some manner, shape or form in helping a child in Africa get to school sometime down the line!” said  Paddy.

Reuse Month 2017, runs during the month of October and is part of a national environmental initiative aiming to educate and encourage people to repurpose, refurbish, donate, sell or repair old items giving them a new lease of life and adding value.  Connie Gallagher, Manager of the Recycling Centres said “We are delighted to support the Bikes 4 Africa appeal during the month of October and we encourage members of the public to donate their unwanted bikes to this worthy cause and view the range of options at the Recycling Centres for recycling household waste” 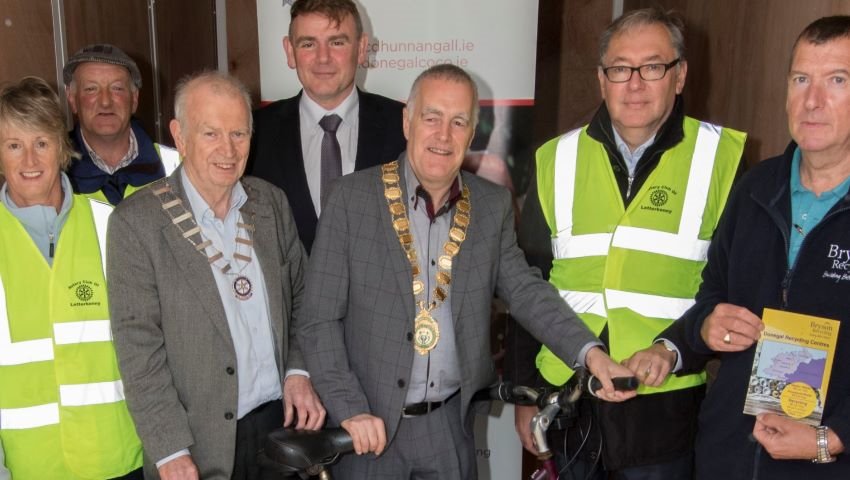